If you missed out on the Brooklyn Bazaar Parties, well then I feel bad for you as they truly were amazing. But no fear, Kanine Records will be hosting another Holiday Party Sunday December 22 at Glasslands (289 Kent Ave, Williamsburg, Brooklyn, NY).

Come by and celebrate the Holidays with us before you head off home to your parent's warm fireplace, fridge, comfy couch, and overall jolly times.

Eternal Summers (They'll be playing some new songs from their upcoming new album coming March 4, 2014, as well as some old favorites.)

Bleeding Rainbow have a new album coming out Feb 25, 2014 and for it they are giving us a taste of some of their new songs as well as some of our favorites from their last album "Yeah Right".

Sasha Frantz Splashh (for this special event Sasha will be playing an electronic set with two friends from Australia. This is one not to be missed as he is bringing a more 1990's Factory Records vibe to the mix over their normal guitar sound.)

DJ: Paulie Primavera spinning the best indie tunes from the 90's and now. 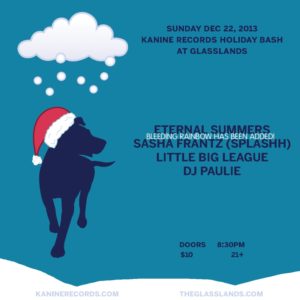